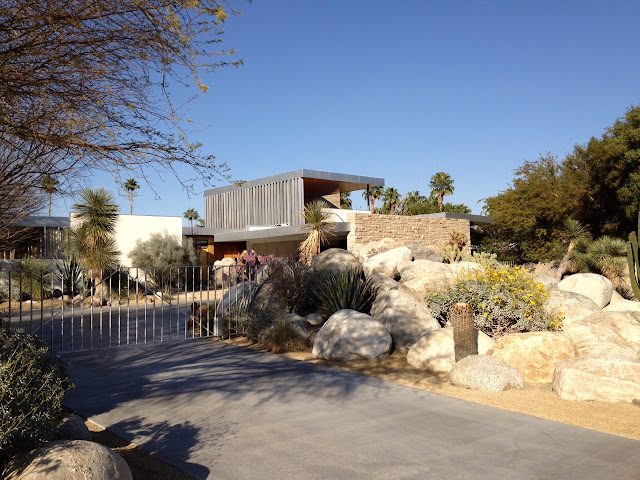 We just returned from Palm Springs for Modernism Week. The collection of Mid-Century homes in Palm Springs is pretty amazing. It is hard to find a collection of so many Mid-Century Modern homes anywhere else in the United States. Modernism Week is an 11-day celebration of mid-century modern design, architecture and culture in Palm Springs. It includes architectural tours, films, lectures, an architectural symposium, educational events, and chic, fun parties in cool mid-century modern homes.

We were able to see Richard Neutra’s Kaufmann House, circa 1946, which you can see in the picture above. It is probably the second-most famous architectural home in America after Frank Lloyd Wright’s Fallingwater in Pennsylvania. Pretty amazing that the same guy, Edgar Kaufmann, a department store guy from Pittsburgh, owned both properties.

It is fun to drive around the nicer neighborhoods of Palm Springs, looking at the amazing collection of Mid-Century homes. Our neighborhood, in Upper Nichols Canyon, is one of the only areas we know in Los Angeles where you can find a similar collection of properties. We were also able to see Frank Sinatra’s former home, from outside, at least. You can rent it for $2,600 a night if you want to live like Sinatra for a night or two.